We hunt every day of the season that is legally allowed. The seasons roughly start the second weekend in October and end the last week in January. Generally there at 107 days to duck hunt and 72 days to goose hunt. Hunting is done in one location with all the blinds being located together. The ramrod, appointed by club manager, calls all of the shots during the duck hunting time. Duck calling will be assigned by the ramrod and is based on skill level.

At Pope Lake Hunt Club we only allow four dogs to hunt at one time. This is to keep the dogs in control and give each dog the chance to get birds without having to compete to retrieve every bird. Having four dogs at the lake at one time also allows for young dogs to train. 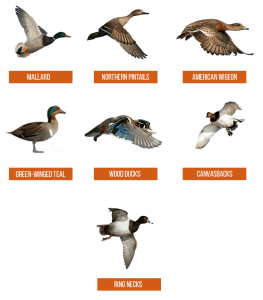